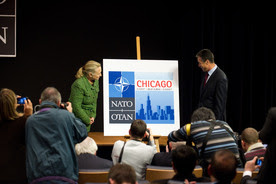 NATO is gearing up for next year’s meeting of heads of state and government in Chicago on 20-21 May. In the margins of today’s meeting of foreign ministers in Brussels, NATO Secretary General Anders Fogh Rasmussen and US Secretary of State Hillary Rodham Clinton unveiled the official Summit logo. The design highlights the Chicago skyline.
“Chicago is a city built upon diversity and determination,” Mr Fogh Rasmussen said. “Those values underpin NATO too. So Chicago is a fitting host for the NATO Summit, as we endeavour to implement our vision of an Alliance ready to tackle the security challenges of the 21st century.”

In her remarks before the unveiling of the logo, Secretary Clinton stated that “President Obama is very excited about being able to host the NATO Summit in Chicago” and was looking forward to “what will be another very significant NATO Summit”.

The Chicago Summit will be the first NATO Summit in the United States since 1999, when the Alliance celebrated its 50th anniversary in Washington.

The Secretary General commented on his vision for NATO and the Summit in a speech on 30 September 2011: “In Chicago, I am confident that you will see a NATO Alliance demonstrating its strong solidarity even in difficult economic times.  An Alliance that is committed, capable and connected.”

Meetings of the Ministers of Foreign Affairs at NATO Headquarters, Brussels - Unveiling of the Official Logo for the Chicago Summit in 2012
Left to right: Hillary Rodham Clinton (US Secretary of State) with NATO Secretary General, Anders Fogh Rasmussen

Barack Obama in #Madrid #cumbreAlf from Diario Responsable on Vimeo.

Obama in Chicago : Event with President Obama and young leaders at the University of Chicago

Inside the White House: Beer Brewing

Film "The Road We've Traveled " from Obama for America 2012